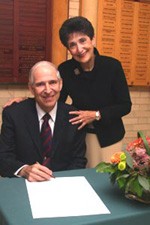 I was born in Fredericton, New Brunswick in 1939, and grew up in this small Maritime town with only 60 other Jewish families. The absence of a Jewish day school emphasized the importance of institutions like Camp Kadimah, Young Judaea, Habonim, Hadassah and the Sgoolai Israel Synagogue. These were the ties that bound the Jewish community, and made me aware of and feel part of a larger, vibrant Jewish community that transcended our small town.

My parents were positive role models for me. For many years my father was treasurer of the synagogue, ensuring its financial health. My mother was deeply involved in Hadassah, serving as the Maritime regional president. In Fredericton, I attended Hebrew School (Chader) later serving as the Rabbi's assistant. After participating in the Boy Scout Movement for many years, I founded a Jewish Scout troop at the synagogue.

While attending Dalhousie University in Halifax, Nova Scotia, where I graduated from Dental School, I was involved in Hillel, became active in Tau Epsilon Phi, a Jewish Fraternity, and served as director of Junior Congregation at Beth Israel Synagogue. During this time, I was director of Camp Kadimah, a Zionist youth camp that had a profound influence on my Jewish development. These activities were the roots of my future involvement and giving back to the community.

As a young boy, I took part in Hadassah's Jewish Child Tag Day to support orphans in Israel, and I remember people saying even back then: “We have our own orphans to support.” As Jews, I believe we have to look after both. I have three children, six beautiful grandchildren. I'm not going to be around forever, and one never knows how committed future generations will be. My wife has already endowed a gift, and I felt strongly that I should do the same. In this way, we make sure that we can, in perpetuity, help to support critical Jewish agencies under the UJA umbrella, to give our children and grandchildren a solid Jewish education and to support the State of Israel.