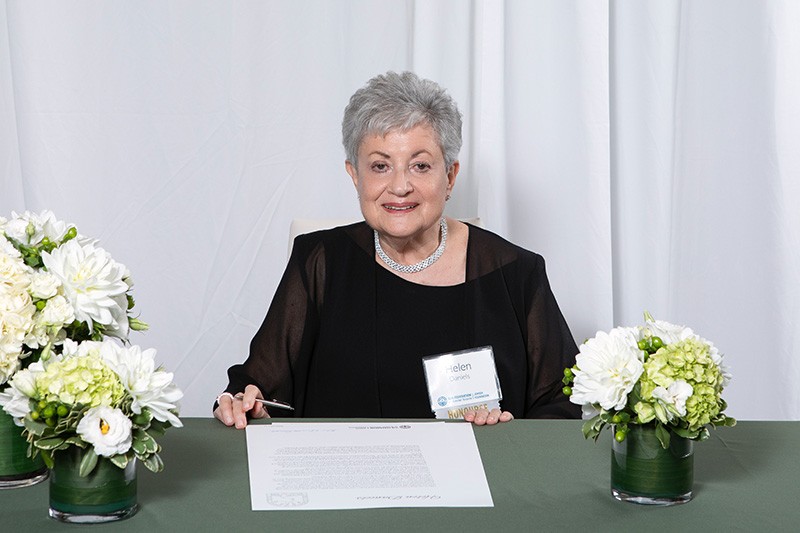 I like to say that I was raised on bread and butter and Zionism. My father had died when I was only thirteen months old, but our single mom ensured that the importance of both tzedakah and Israel were imprinted very early on the consciousness of my brother Harry and me. Though our small family existed on next to nothing, we shared whatever we had. My mother, Ida Urman—a strong influence on me— was an enthusiastic member of Na’amat/Pioneer Women, and I was always enlisted to deliver the Jaffa oranges the volunteers of the organization sold to raise money for charity. I attended a Labour Zionist Hebrew School for nine years, and spent many hours canvassing door-to-door with my JNF box—and also at the cemetery before the High Holidays!

The arrival of my late husband Phil’s family in Canada nearly didn’t happen, but a last-minute reprieve by the Minister of Agriculture allowed the whole Daniels family to immigrate together, and the boys, John and Phil, grew up to be very influential in the Jewish community. My father-in-law, Abba Danilack, an intellectual and scholar, was in turn an icon in Phil’s and my family, a teacher at Associated Hebrew Schools for thirty-two years, and greatly respected by us all.

I began my adult volunteer activities as a young mother when I joined the National Council of Jewish Women. Through them, I headed a United Way campaign for youth across Toronto, then became involved in the founding of Beth Tikvah Synogogue, served as one of their earliest sisterhood presidents, and then became heavily involved with UJA. and later the Canadian Jewish Congress.

I have fond memories of spending happy hours through a friendship of my mother’s playing in the offices of Jewish Family and Child Service when it was located on Beverley Street. Years later, I was delighted to sit on their board. The organization remains a passion of mine for the outstanding work they do.

I am so proud of the strong connection my four children, Ronald, Risa, Cheryl and Jonathan and their families have to their heritage and to living our values. Now, my fondest wish, because I am increasingly concerned about our diminishing Jewish population, is for my twelve grandchildren to nurture a similar connection, to maintain that value system, and to continue to practice and transmit the tenets of our faith that include tzedakah, tikkun olam and gemilut chasadim.