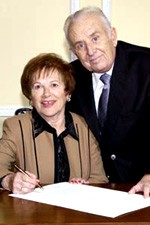 Ernie Goldberger was born in 1924 in Transylvania to Edmundand Bertha Goldberger.

He had three brothers and a sister. On May 5th 1945, Ernie,his father, and two older brothers, were conscripted into the Hungarian military. The rest of the family remained in Budapest.

From Hungary, these four men were sent to Engrau, Austria, where they were forced to dig trenches.

Luckily, my grandfather had his bicycle and was given the job of messenger between the prisoners and Austrian soldiers.

After the trenches were completed, all the prisoners were sent back to Budapest to clean the city following the British bombings. On December 5th 1945, my grandfather and the men of his family were sent by train to Mathausen, a large concentration camp. A Hungarian woman safely hid his mother and sister in Budapest. Once in Mathausen, they were beaten by other prisoners at the prodding of the Nazis. The camp was overcrowded, lacking sufficient food, water and barracks.

After two nights at Mathausen, all the prisoners were forced to walk for three days and nights to Guntkirhen. During the journey, the Austrians did not bother to feed them. They had no alternative but to eat grass, shrubs and bones to survive. Two days later, the Americans arrived. They were not prepared to accommodate prisoners of war, so they set up housing for the Jewish prisoners in a school in the nearest German town, Welse.

Returning home after the war, my grandfather and his brothers were subject to the draft. They knew that they had to leave Hungary immediately. They contacted my great-grandfather's American cousin, Rabbi Alexander Rosenberg, who had been sent to Germany by President Harry Truman to assist the Displaced Persons and he arranged a guarantor for the family to come to Canada.

In 1946, my grandfather arrived in Canada. By selling some antiques to Rabbi Rosenberg, the family got a start in Canada. In 1948, he and his brother Bernie started Best Outer Wear manufacturing ladies coats. They went on to have a successful career in real estate development.

Today, my grandparents, Ernie & Barbara, who have been happily married for over 50 years, have three children and seven grandchildren. They are proud of them all. My great-grandfather taught my grandfather that to give is one hundred times better than to receive once. That is the way he was raised. He likes to give to charity and advises all his grandchildren to do the same because charity and good deeds come back to you.