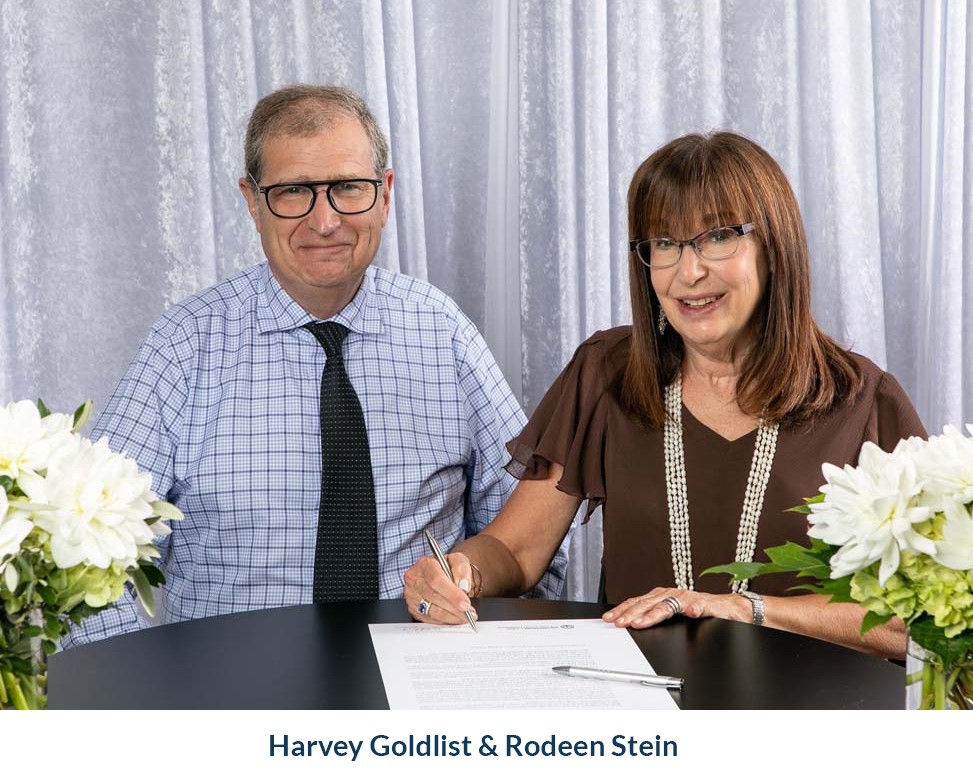 Each of our parents, Kay and George with their immediate families, were fortunate to have left Poland before the start of WWII and were spared personal impact of the Holocaust. There were many extended family members who, tragically, were not spared.

Our parents first met by living in the same house. When the Goldlist family arrived in Toronto, Canada, they sublet space from our mother’s family. When our father was seventeen, he enlisted in the Canadian Air Force and was sent only as far away as Quebec for some of his courses. His training as a pilot was curtailed by a knee injury in a friendly game of football, and he was redirected to take more courses and to train as a navigator. By the time his training was complete, the war was winding down and he was never deployed overseas. Later in life he would wonder if that friendly football tackle saved his life.

Due to his time in the service, our father was fortunate to be granted some financial support for further education. This allowed him the advantage to pursue post-secondary education, something that most immigrant families, including his, simply could not afford. The expectation was that families needed all abled members to work as soon as they were employable. Our father elected to study accounting while our mother worked as a secretary to Rabbi Slonim of the McCaul Street Shul.

Our parents married shortly after the end of the war and they brought up their children with clear values: to be kind, to be generous, and to be grateful. The values our parents imbued in us were synonymous with pillars of Judaism, including Tzedakah and Chesed. And these came from our grandparents who lived by the same moral code.

Our father had a very successful career—as a chartered accountant and then as a residential real estate developer. With all the success, our parents did not lose sight of their good fortune. They gave of their time in volunteering, in addition to their charitable giving.

Our parents decided to initiate a Foundation to secure their legacy so that they would create a vision for their children and their grandchildren. We are proud to have this Foundation now at the Jewish Foundation and be part of the Book of Life. Not only are we honouring the example they set for us, but we are able to share with many others and hopefully inspire so many to do likewise. We strive for a next generation that becomes involved in giving back to the community. The continuity is vital.

As told by Harley Goldlist, Rodeen Stein, and Jeff Goldlist