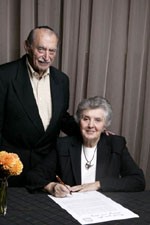 We have never forgotten who we are as Jews.

But it wasn’t always with ease that we lived our Jewish lives. We are survivors.

Born in Czechoslovakia, we were each raised by families with strong Jewish values. We were fairly young when World War II turned our lives upside down. Henrietta was only 12 years old when surviving in a concentration camp. Her parents sadly perished. In 1949 she came to Canada with her close extended family and lived in Montreal for 10 years.

Micky escaped the Hitler regime and made his way to Hungary in 1939. In 1941, he managed to get to Palestine and joined the Palestine unit of the British 8th Army. In 1948, living in Israel he joined the Israeli army.

Micky’s time served with both armies is testament to the deep connection and commitment to our Jewishness and to Israel. This has never waned and it’s always been part of our lives.

When we met in Montreal, Micky was on a business trip visiting from England where he had moved in 1952. We married after a 48 hour courtship (when you know something’s right, you know!). We spent the first seven years of our marriage in England before coming back to Canada and eventually settling in Toronto and raising our family. We have two wonderful daughters, Naomi and Deborah and five beautiful grandchildren.

Our lives have taught us what’s most important is continuity, to know who you are and never forget. What we most hope for the future is that our children, grandchildren and future generations shall continue to live with a peaceful Israel, honour their Jewish identity, our collective past, values and traditions.