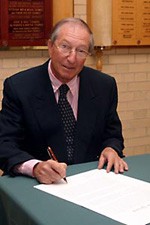 I was brought up in a secular home. My parents had abandoned religion after my grandfather and other religious Jews froma Polish shtetl were hung in a pogrom. I did not have any religious experience as I was growing up - did not learn Hebrew and did not have a Bar Mitzvah. However, I did have Jewish experiences. At home, Yiddish was commonly spoken along with English; I attended a Yiddish Shule after school and spent summers at our cottage at Camp Naivelt.

Once I got married and had children, I began to appreciate the role of the synagogue in providing a Jewish education for my children. My family joined Solel, then later Temple Har Zion.

Of course, I knew about the Holocaust. My first wife and her parents were survivors who escaped the Germans. The knowledge of what happened brought home to me the idea that Jews can never be entirely safe in any country. It is a chilling thought that any one of us now enjoying the good life in Canada could have been among the 6 million. Only Israel can be counted on to provide a safe haven for all Jews as we see today anti-Semitism has once again become an acceptable way of life in many countries.

I cannot articulate why Jewish survival, long after I am gone is important to me, but it is. I feel that it is important to maintain Jewish identity, whether through religion, culture or Zionism. It is equally important to preserve a strong and secure Israel that will be there for Jews around the world, should persecution once again become too much to bear.

There are many Jewish organizations that do wonderful work towards these two goals. However, I believe UJA is the organization that can best meet these goals through the many agencies it supports - from A to Z - adult education to Zionism.

I have been a supporter of UJA for many years, both as a donor and as a volunteer. I decided to leave a bequest in my will so that the income from it will maintain my current annual donation in perpetuity. Perhaps my heirs will see fit to also support UJA. I can't say. But through this bequest, UJA will be able to continue receiving my share of its funding. I am pleased to be able to continue contributing long after I am gone to a cause I believe in.