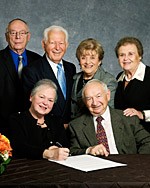 Wierzbnik was a village in Poland, built on the banks of the River Kamienna, next to a town called Starachowice. In the late 18th century, a Jewish community established itself, and for the next 150 years, a vibrant Jewish community flourished there.

Within days of the outbreak of the war, Wierzbnik was occupied by the Germans and immediately annexed to Starachowice. A Ghetto for the Jews was set up and our townspeople suffered greatly during the occupation. On October 27th, 1942, the ghetto was liquidated, and almost all of the inhabitants were deported to the death camp Treblinka.

Here in Toronto in 1933, the Wierzbniker Friendly Mutual Benefit Society was formed by a group of local landsleit. Aside from providing free loans; free access to a doctor; financial assistance to members when illness or other emergencies struck; cemetery plots; and social interaction, the Society undertook fundraising to send money, clothing, and medical supplies to Wierzbnik. After the war, it arranged whatever assistance possible in helping to bring survivors to Canada and help them become established.

A special “war memorial” monument was erected at the cemetery in Toronto in 1956, and in 1974 a memorial book was published. Today the Society provides an opportunity for members to interact, and to be actively involved in many local Jewish and Israeli causes.

There has been a renewed interest in the Society, the result of a group of the second generation, led by 2 local survivors, who traveled to Poland some years ago to attend the consecration of the Wierzbnik Jewish Cemetery as an historical site (there are more than 300 gravestones still standing). In addition, they participated in the dedication of a room in the new “Museum of Culture” in Starachowice, as a “Memorial Room to the memory of the Jews who inhabited the Town of Wierzbnik for over 150 years”. This experience has left a lasting impression, one of which has resulted in our annual “Haskara” – Memorial Service for the victims of the war – to become one of special and important significance.

The Wierzbniker Friendly Mutual Benefit Society is very pleased to have recently established an endowment fund with the Jewish Foundation of Greater Toronto.