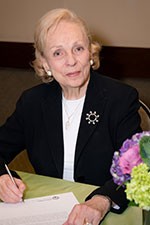 I was born Cynthia Goldie Kleinert to hard-working, immigrant parents who had come to Canada from Chmielnik, Poland. The values Will and Anne Kleinert Z"L, passed down to me—hard work, family unity, tzedakah in the community and Israel— have been the foundation upon which I am now seeing my life’s goals fulfilled.

As a child of the Depression, I began living by those values early in life: by the age of fourteen, I was working after school, weekends and on summer vacations.

I worked at the YMHA’s Jewish Camp Council as a controller, and it was there that I took my first major steps into volunteerism as chairman of the Social Services Division of UJA.

My role model and mentor for volunteerism and charitable activities was my late father-in-law, Meyer W. Gasner Z"L, who taught and led by example.

While raising my four children, I became active in National Council of Jewish Women. As an executive officer and national representative of NCJW, I had the opportunity to learn and give back to the community, and those experiences opened many doors for me. As my children grew older, I was asked to form a Parents’ Advisory Council at Community Hebrew Academy of Toronto (CHAT).

After returning to school in 1969, I received public relations accreditation and an Honours BA in Political Science. My enhanced education provided the resources to participate in a number of communal activities, and in the succeeding years, I hosted the Chai television show, became a freelance feature writer for the Canadian Jewish News, and the Information and Public Relations Director for the Kashruth Council of Canada, Canadian Jewish Congress as well as volunteered at many other communal organizations.

I began volunteering in the early 1970s at Baycrest when I was approached by the Director, Sam Ruth Z"L, to join the planning committee for the Terrace and Wagman Centre. I was proud to be the first female elected to sit on the Baycrest Executive and to serve as Vice President for three terms. I currently sit on the Boards of the Lands of the Bible Archaeology Foundation and the Canadian Shaare Zedek Hospital Foundation.

Throughout the past sixty five years, from my initial involvement with UJA in the 1950s, my endowment to UJA Federation has represented a continuation of my philosophy of communal involvement.

I am very grateful to witness that my children and their spouses - Myra and the late Nathan Mechanic, Brenda and Brian Lass, Robert and Julea Gasner and Jon and Ellise Gasner — and my grandchildren have now become leaders in contributing to the Toronto community and to Israel, and I am proud that I have children, grandchildren and sabra great grand-children living in Israel.