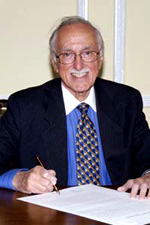 I am a child of immigrants. My father, Zelig came from Zhitomir in Russia, and my mother, Annie from Pzemszyl in Galicia. They met in Toronto and were married in the early 1920's.

My father was a barber, and my mother a hand-sewer in a garment factory on Spadina Avenue. My sisters, Rita and Mimi, and I were born in Toronto in the 1920's and we grew up in the Depression.

I was touched by two Jewish organizations while growing up – once as a boy, and once as a young man -and both had an influence on my future involvement in the Jewish community.

As a boy, I remember my parents' concern about how we could keep warm in the winter. Coal had to be paid for in cash. My mother went to the Toronto Hebrew Free Loan to borrow $100 for the winter's supply of coal. Every Sunday morning, my mother gave me $2 to take to 150 Beverley Street to make the weekly payment on the coal loan. It took a year to pay it off -just in time to borrow it again for the next year.

As a young man, I graduated from Harbord Collegiate in 1944 with honours and I didn't know what to do. We had no money. I turned to Jewish Vocational Services, also at 150 Beverley Street. With their guidance and direction, I became a Chartered Accountant, graduating in 1949.

Shortly thereafter, my firm appointed me as the partner in charge of a new client -the Toronto Hebrew Free Loan! Was it pre-destined that I would be able to help an organization that had helped my family so many years ago? There I saw businessmen giving their money, time and energy to help fellow Jews. They taught me how Jews should live.

My first trip to Israel was on a special UJA study mission for young leaders in 1962.

Over the years, I became president of the Toronto Hebrew Free Loan, president of Jewish Immigrant Aid Services, and president of Adath Israel Congregation. I served in the United Jewish Welfare Fund, and in many UJA Campaigns. I helped organize the Toronto fundraising for the Alyn children's hospital in Jerusalem. Presently, I am the treasurer of the United Synagogue of Conservative Judaism, Canadian Foundation for Masorti Judaism in Israel, and Mercaz-Canada. All this I did with the support of my wife, Ruth, who willingly shared me with our community. I believe in Jews helping Jews.

I have had great satisfaction in being able to help Jewish people in Toronto and in Israel. Helping is both a privilege and an obligation. I hope to continue to help as long as I can, and that my legacy will then continue to help.