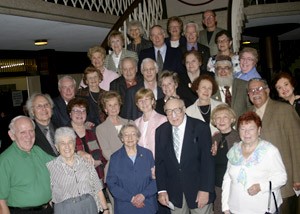 Our family organization, the Agudas Hamispoche, was formed in 1928 by dozens of cousins from the Rubinoff, Naftolin and Arnoff families who came to Toronto from "White Russia" (now Belarus), beginning about 1905. Many treasured friends and in-laws were also "adopted into the mispoche" over the years.

The original generation of immigrants and their children lived with a closeness that was akin to being brother and sister. They worked together, socialized with each other, helped each other, shared simchas and sorrows, and practically lived in each other's homes. In the early years they met regularly in the homes of relatives, where refreshments sometimes included shmaltz herring and cold beer tapped from a keg, and later in rented halls such as the former Old Folks Home on Cecil Street.

Most of the original generation and their children lived within walking distance of each other on Queen St., Defoe (Adelaide), Fenning, Shaw, Ossington, Turner and Mitchell avenues. Some families lived in the Jewish neighbourhood in the West Toronto Junction. They worked as grocers, bakers, tinsmiths, tailors, barbers, hatters, plumbers, junkyard dealers, merchants and builders. Several owned shops along Queen St. W.

An "aktzia" or loan society was formed in 1929 to help relatives in financial distress. Many businesses were started on the strength of a loan of $100 which was paid back in small unhurried installments with no interest. The Ladies Auxiliary tirelessly held teas, rummage sales and other events to raise money for Jewish Palestine and many other charitable causes. Beneficiaries included the former Old Folks Home, Mount Sinai Hospital, Canadian Heart and Stroke Society, Canadian Cancer Society and the UJA Federation and Jewish Foundation of Greater Toronto.

Family members met weekly throughout the '50s and early '60s in a hall on College St., then in uptown premises near Wilson and Bathurst. They established the Relative Young Men's and Relative Young Women's societies but over time these became less active and amalgamated back into the main group. In 1988, they established the Agudas Hamispocha Philanthropic Fund at the Jewish Foundation of Greater Toronto. The Fund supports numerous charities annually.

In recent years members meet for monthly breakfasts from spring to fall. This year (2005) the Agudas Hamispoche marks its 77th anniversary. We hope to perpetuate the good deeds of our beloved founders of blessed memory for many years to come.

"The world stands on three things: on Torah, Divine worship, and acts of loving-kindness." — Pirkei Avot, 1:2.