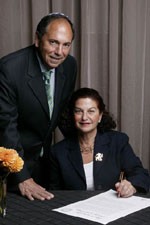 Growing up in very different homes, we learned the importance of community from divergent approaches. For Steve, learning about community at an early age was unavoidable. It was in his genes; it was, as they say, besheret.

Steve learned from his parents, both of whom were extremely active in the Montreal and Canadian Jewish communities while Rosanne’s involvement took flight, so to speak, following her first trip to Israel.

For close to four decades, Steve has been a dedicated, knowledgeable professional in Jewish communal service; and Rosanne has been a tireless volunteer for almost as long. Both have assumed positions of leadership, but both believe that they have received more from their involvement than they have given.

We consider ourselves blessed to have witnessed - firsthand - great moments in Jewish history, moments neither of us will ever forget. Whether it was when Israel rescued Entebbe hostages; when Operation Solomon brought 15,000 Ethiopian Jews to Israel in 36 hours; or when, after 20 years of working to free Soviet Jewry, we stood on the tarmac at Ben Gurion Airport to personally welcome 400 new Olim from Russia. We were part of seeing a dream realized. We were part of history, indeed a unique and rewarding experience for anyone.

Leaving a legacy is not about fundraising—it is a concrete expression of Jewish values that will endure beyond a single lifetime. It does not replace annual or capital giving. We view it as an extension of our personal commitment to the idea of “community” – a microcosm of the Jewish People, which is our extended family.

And for us, it’s always about family. Our challenge will be to convince the next generation to preserve the incredible heritage of the Jewish People, and that marvelous feeling of “family” that, in many ways, sets us apart from other religions and ethnicities. It is also about finding ways to ensure that they love Israel the way we do.

We believe that no single individual, no matter how wealthy or wise, can successfully address these issues. Only through collective, concerted action over a long period of time and with a great deal of money and imagination can our tasks be accomplished. This is what our legacy of giving is about - to build a caring community, concerned about each other, Israel, and Jews throughout the world.