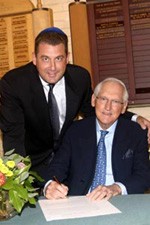 Our family can trace its Jamaican roots back to the 18th century. In 1655 the Island of Jamaica was captured by the British from the Spanish. From that date the secret Jews (or conversos) who were then living on the island disguised as Christians, along with thousands of Sephardic Jews who migrated to the island over the years, were able to practice their religion openly and without fear of persecution. The British Government encouraged Jewish settlers and other colonists by granting them land and so a large Jewish population grew in numbers to some 2,500 by 1881, representing about 17.5% of the total white population of Jamaica at that time.

After 250 years the island's Jewish population, due to migration, inter-marriage and lack of religious commitment has dwindled to only about 300 Jews. My wife and I were concerned with the future Jewish identity of our three sons, Guy, Simon and Jeremy, given the limited facilities on the island for Jewish education. Migrating to Toronto in 1976 we were able to provide our children with a more comprehensive Jewish education and, on the secular side, give them the opportunity to attend and graduate from their respective universities.

Today our three children are all married and participate in an active Jewish-oriented life with their children receiving a thorough Jewish education at day schools. We have seen how indifference and neglect can weaken the Jewish chain of which we are all a part and we are fortunate to have been able to strengthen our own link.

In setting up our Charitable Fund we are mindful of the advice of Michah:

"To do justice, to love kindness, and to walk humbly with your God."

We are privileged to be part of the UJA Federation and to be able to provide some assistance for needy causes now and for the future.