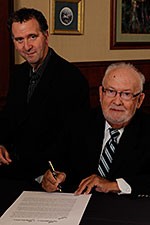 Miriam — or Mickey, as she was affectionately known to her family and close friends — was a distinguished lady by her very humanity. She was a woman who gave of herself tirelessly throughout her life.

When you look back to see how such a fine individual blossomed, there is no need to go further than her parents, both Russian immigrants, who settled in Winnipeg. Miriam, along with her siblings, Freda and Irving, watched their working-class father give to countless causes, never refusing any solicitation, even though sometimes beyond his means. Generous to a fault, he was a pious man, and he served as an inspiration to Miriam, who in her own right found ways of contributing to worthwhile causes at home and abroad, particularly in Israel.

Though born and raised in Winnipeg, Miriam spent thirty years in her husband Roy's hometown of Dublin, Ireland. There she raised a family of five children: Rory, Lawrence, Sharon Z"L, and Stephen and Gill, her twin sons. She always maintained a kosher home which was filled with activity and constant entertaining. Indeed, her cooking skills were quite exceptional, and everyone was welcome at her table. As Miriam's mother, Zena, and father, Harry, were an inspiration to her, so was she an inspiration to her whole family. Upon relocating to Toronto in 1983, she became deeply involved in Shaarei Tefillah Synagogue’s sisterhood and other organizational activities. When she was in Ireland, WIZO — and anything to do with Israel — was her abiding love. She was one of the founders of the 35s group, which worked to bring Jews out of Soviet Russia during the Communist oppression.

Miriam could rightly be called a “cultured person”: she loved art, ballet, music, and theatre. She was a fluent Yiddish speaker and writer, something she learned from her parents and her schooling in Winnipeg. In keeping with her sophisticated tastes, she was a very smart dresser, whose hats and accessories were widely admired. When Miriam passed away in 2000, family and friends decided to honour her memory and established the Miriam Alkin Memorial Fund. Through this fund, financial assistance has been made available to many causes and charities in Canada and abroad. It is hoped this will continue in perpetuity.

Miriam will never be forgotten by her family and friends. The measure of that love is best characterized by the inscription on her gravestone: "Her ways were the ways of pleasantness — And all her paths were Peace."

as told by her husband, Roy, and her son Gill