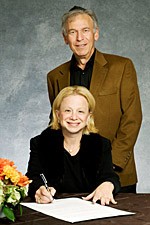 Our story is a story of giving back. Canada has truly been the land of opportunity for both our families. As well, Israel has always been in our hearts.

My husband, Morris, is a “Child of the Holocaust”. His arrival in Canada is truly a miracle. After his father failed the physical, a cousin mailed $10.00 to a Government Official with a request that he have another physician review my father-in-law’s X-rays and “do as he sought fit” with any surplus. Thus began their journey from the work camps of the Holocaust to Canada. Arriving with only determination and a will to work, Helena and Jack Altman forged a life that gave their son the chance to become a dentist. They became members of the Toronto community and charity was always a part of their lives.

My father, Lewis J.E. Moses, was an immigrant to Canada from a European family where tzedakah was always a part of their lives. He was active in just about every Jewish charity and many secular charities. After returning from Europe, where he served in the RCAF during the War, my father arranged for “job offers” for hundreds of immigrants and sponsorship for many more. He was active in the Herut and helped raise funds to arm the new State of Israel. He served as President of JNF, Zionist Revisionists of Canada, was the founding President of Torah Emeth Synagogue, sat on the Boards of UJA, Shaarei Shomayim, Eitz Chaim Schools, Jewish Board of Education, Canada Israel Committee, was a Negev Dinner Honouree etc. My mother, Ethel, was the first member of our family – on either side – to be born in Canada. She also came from a family where tzedakah was a strong influence. My parents always had meetings in their homes for numerous charities. Although they were not wealthy people, they gave beyond their ability. They encouraged me and my two brothers to become educated. I became a lawyer, Sam a Real Estate Broker and Joel a Social Worker. They also encouraged us to give back to the community.

It was after my father’s death, when a newspaper wanted to write an article on him, that I realized how much he had done and how little, by comparison, I did. This gift is our way of trying to emulate our parents – and to honour their memories and to help our people. We hope that our children - Marc, Michael and Jaclyn - will learn by example – as we did – and follow the family tradition of tzedakah.