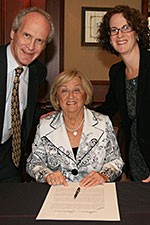 Our father was born in the depths of the Depression, and his teen years were no doubt clouded by World War II. Perhaps that is why he left school — to make money to enjoy life a bit. He came to regret that decision, which led him to complete his education through adult education courses later in life.

Our father was an interesting blend of a Montreal Jew who was not from the Old Country but who married into a family that was. While not of religious parents, he became involved in the nascent Jewish community in Chomedey, and was one of the founding and active members of the Young Israel of Chomedey.

He not only taught us respect, but he was also a model for others, showing respect for community and family. He treated his in-laws as his own parents, and as they had no sons, said Kaddish for a year after their deaths.

When we were young adults, our father began to explore a more religious path. He ultimately settled on a balance between the modern life he shared with his family, and the introduction of the study of Talmud and daily prayer for himself. He beamed with joy when he received his own set of Talmud books for his sixtieth birthday.

Our father was the rock of our extended family. Whenever there was a need for a calm, rational thinker, Sonny was the person everyone went to. He taught us to be independent, but also to remember that we were part of a bigger community. He always stressed the importance of education, and while he expected much of people, he was always fair.

Our father was one of the most optimistic people you would ever meet — he never let himself be knocked down when he experienced frequent health issues as he went into retirement. He treated people with respect regardless of their position in life. In his last days in hospital, he always had a smile and a thank-you for the medical staff, even when they were inflicting unavoidable pain.

He spent many years studying Talmud, and lived by the entreaty in the Ethics of the Fathers: “What is the right path a man should choose? Whatever is honourable to himself, and honourable in the eyes of others.” He was truly a remarkable father, husband, zaidy, and role model. He would be happy to know that he was helping someone who shares his love of Hebrew studies to develop and continue that teaching to others.

as told by his children, Cheryl and Earl, and with special love from his wife, Helen