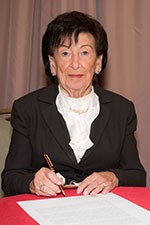 Our mother Jennie has been an incredible role model for her children, grandchildren and great grandchildren. Her commitment has always been to a well-rounded Jewish life built on the 3 pillars of Judaism: torah, prayer, and charitable acts.

Born and raised in Toronto, her father was a Rabbi and Schoichet and he and her mother taught their 4 children the meaning of tzedakah. Working hard through the 1920’s and the depression era of the 1930’s, every penny was earmarked to bring family to Canada from Poland. And yet they still gave to those who knocked on the door with their hands out, and our mother learned to give to those in need without question.

These values were shared and enhanced by the love of her life, our father, Moishe ApplebyZ"L. They first met at cheder when she was 12 years old playing the beautiful Queen Esther and he was a 14 year old usher and ticket taker. He fell in love with her then watching the Purim play. In 1941 they were married. Their home life reflected their values and both were committed to a life that included being active volunteers and giving of themselves.

UJA telethons, Baycrest, Israel Bonds, JNF and Adath Israel Congregation have all benefitted from their efforts and contributions. They both taught Jewish Literacy as volunteers at Adath Israel and Jennie continues Moishe’s legacy with the chesed committee of visiting those in need in hospitals and institutions before Jewish holidays. They have established foundations at both Baycrest and Adath Israel and now at the Jewish Foundation of Greater Toronto. Moishe in addition delivered Meals on Wheels in his retirement and was an early leader for Picture Pioneers and Variety Club (Variety Village charities). Jennie was President of her Hadassah Chapter, active in Sisterhood and continues to manage the Jennie and Moishe Appleby Sisterhood Judaica Gift Shop at Adath Israel. The synagogue has always been a central part of their lives, not only through attending services every Shabbat but participating in all aspects of synagogue life. Jennie has been a life-long learner, starting as a child in the 1930’s with the Shabbat afternoon shiurim with her father to the Tuesday evening torah study with Rabbi Schild today and all the study programs in between.

For our parents, the highlights of the week and the year, were the Shabbat and Yom Tov meals with their whole family around the table. Through their love and example they have passed on to their children the importance of giving to others and have been so proud of the contributions their children have made to the community. This is their great legacy — what they have given, what they have shared, what they have taught by example.