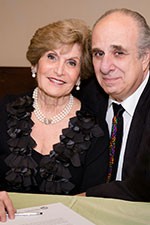 My first trip to Israel was a turning point for me.

As a child who fled the Holocaust with her parents, Celia was raised in a home that never took the existence of Israel for granted. But both my parents were Canadian born, and though I grew up hearing stories of my grandparents’ struggles coming as teenagers to a new land, of the deprivations of the Depression, and of seeing for myself during my childhood ominous signs reading “Jews Not Allowed,” I never really understood the fear and poverty entailed in being an immigrant, the sacrifices involved in building a new country from the ground up, and the horrors that our people suffered both during and after the war. That trip, on the occasion of our twentieth anniversary, brought my grandparents’ lives into focus for me, and I understood on a visceral level that the existence of Israel allowed Jews the world over to hold their heads high and say “never again.”

Celia was born understanding these things. The fact that her mother gave birth to her in Tashkent, Uzbekistan during the war, that the baby survived and that the Tessler family made it to Canada was in itself miraculous, and Celia has never taken her good fortune lightly. As her parents prospered in their new country, they were convinced that every future successful deal was contingent on their giving back to their community. This was the atmosphere of tzedakah and Yiddishkeit that Celia grew up with, and she has made it a priority to pass on to our children and grandchildren.

After that first Israel experience, I was able to truly appreciate my own father’s magnificent gestures of generosity within our family, to recognize the significance of his taking part in the 1959 UJA Study Mission to Israel to study the problems of the olim, and to begin to emulate that generosity in a way that felt right to me. Now, together, our passion and joy is to witness first-hand how our donations make a difference both in Canada and Israel. Celia is particularly thrilled to be up close and personal with a Magen David Adom ambulance or motor scooter, with guide dogs for the blind, and with warehouses distributing food to the needy. And she’s adept at finding new causes where we might do some good.

My dad used to say, “you can only wear one suit at a time.” Celia and I both feel blessed to be able to provide “suits” to those that need them, and to teach future generations to do the same.