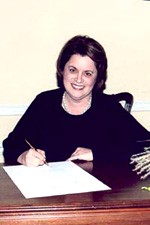 I knew from my own experiences how easy it is to lose the connection to Jewish life. Raised with little Jewish tradition in my home and in a predominantly non-Jewish suburb of Boston, I did not have a strong affiliation with the Jewish community and nearly missed out on all the gifts that Jewish life has to offer.

It wasn't until I moved to Toronto for school and married my husband that I listened to the voice within me that yearned for more. My husband Henry's parents were both survivors of the Holocaust. As I connected to their personal stories I found that I was more interested in our collective Jewish story. Little by little, I became more engaged in being Jewish and in the community.

It was several years later, by chance - or perhaps not - when I was invited to a UJA Federation Women's Campaign & Advocacy canvassing meeting that the doors really opened up for me.

Inspired by the work of UJA Federation and its agencies, I volunteered extensively, went on a mission to Israel, and eventually took on the role of chair of Women's Campaign & Advocacy, March of the Living, National Committee for Jewish Campus Life and other initiatives.

I am proud of being Jewish. I am grateful that I found the Jewish community. It has been a privilege to give back, and while I know I am doing my best to contribute today, I've often wondered what will be available for tomorrow. Endowments helped me answer that question.

Gifting my own Lion of Judah Endowment was a powerful opportunity for me to express my personal commitment to the community. I know my contribution will have an impact long after I'm gone. In a sense, it also completes a circle. As a youngster, I longed for more connection to Jewish life and years later I found it. I never want to lose it again or know that others may be without the opportunity to participate in Jewish life.

There is a Jewish heartbeat in every one of us. I'm so glad that I heard my own. I am confident my endowment will provide the chance for others to hear theirs as well.