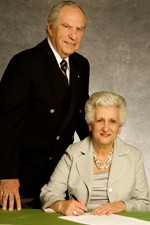 Samuel Berl Z"L was born on November 15, 1910 in the small Polish town of Gurno. Born into a traditional Jewish family, Sam had intensive religious training as a child, which would lead to a lifetime of living a good, Jewish life.

At age 19, Sam moved to Germany, where he had an uncle, to take advantage of what he saw as better economic opportunities. However, a few years later, fearing the rise of Nazism, Sam moved to Paris, France, where he worked in the needle trade.

With the outbreak of the Second World War in 1939, Sam enlisted in the French Arm but was captured. He was made a Prisoner of War in 1940. The Germans did not differentiate between Jewish and non-Jewish POWs, and Sam was able to survive the war. For the next five years, Sam, along with other POWs, lived the unfortunate life of a forced labourer. He spoke little of his experiences during this time, preferring to close this dark chapter of his life and focus on happier times.

When the war ended in 1945, Sam made his way back to Paris. It was during this period that he learned the rest of his family had not survived the Holocaust. In 1951, he immigrated to Canada to join his cousin, Al Kornblau, who was living in Toronto. Al was his last remaining relative and his only link to his lost family.

Like many immigrants of the day, Sam found work in Toronto in the garment trade and remained there until age 65. At the tender age of 67, he embarked on a 20-year career as a messenger for downtown financial institutions, allowing him to stay fit and active. As a long-time member of the Miles Nadal Jewish Community Centre, he was also a regular attendee of the morning prayer services at the Michael Bernstein Chapel, a benefactor in his will. In his memory, a window and a memorial plaque were installed to honour him.

When asked why he never married, he replied that he didn’t think he could make enough money to support a wife and family. A man who enjoyed a simple lifestyle, Sam saved what he could and found great comfort in giving to charity and to less fortunate individuals. ‘There’s always someone lower down on the ladder,’ he would explain.

Typical of Sam when he passed away, he bequeathed money in his will that established an endowment fund at the Jewish Foundation so that his dreams and commitment to our Jewish community would live on for generations to come.

As told by his niece, Linda Garshon.