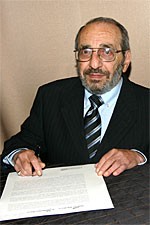 In every life there are interactions with another human being whose influence sets the course of our interests. My father died in 1937, leaving my mother a single parent with a second child on the way. Even though we had very little money, she did everything in her power to ensure that we had a Yiddish education. She sent us to the I.L. Peretz School in Calgary, where classes were conducted mainly in Yiddish. The tuition was $15 a month, a significant amount in the midst of the depression, especially for a single parent who had to shoulder the burden of raising two children on her own.

My mother was also a very dynamic woman and despite having a family and business to manage on her own, she always found time to be involved with the community – eventually she became the president of the schools Women’s Auxiliary. Not withstanding her love of Yiddish she was an active member of Na’amat, then known as Pioneer Women and became an officer of the National Executive.

When my mother passed away, my brother Aaron and I decided to start an endowment fund for Yiddish education in her memory. It was also a way of keeping my sons connected to the community and their Yiddishkeit. My wife Ana, a lifelong Yiddish teacher, and I, spoke Yiddish to them and it became their mother tongue. We wanted to ensure that our children would continue the legacy of Yiddish both for themselves and for their children.

To date, the foundation has been successful in supporting students to study Yiddish at Columbia and York Universities and in Poland, teaching toddlers Yiddish songs, and, in the spring of 2007, we brought the play “No More Raisins and No More Almonds” of the Dora Wasserman Theatre in Montreal, about the life of children in the Ghetto, to Toronto which played to packed audiences.

It’s my hope that our involvement with the Book of Life provides another avenue of maintaining the survival of Yiddish and to demonstrate its value and its culture to present and future generations of children.