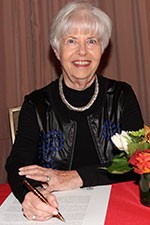 My beloved late husband Ernie Z"L passed away just over a year ago. It was only in his last few living years that he became involved with the March of the Living program. Ernie was a Holocaust survivor and despite the horrible losses — his entire family was murdered and his life as a Czechoslovakian was completely destroyed — he managed to rebuild and create a wonderful life and family in Toronto. Ernie did not speak much about what he endured until he participated as a Survivor chaperone on the March of the Living, first in 2009, and again in 2011. I encouraged him to take part without me. The experience was so powerful and he needed to do it for himself. He would claim the same reason but would add that it was also for all the young student participants. Ernie, himself, was a child at heart and he had an incredible connection with young people. All five of his grandchildren could attest to that!

I also survived the Holocaust after being hidden in a convent, in Budapest. I always felt much more fortunate than Ernie since almost every relative of mine was not deported and survived thanks to an uncle who was able to hide us, and my immediate family remained whole. We immigrated to Canada in 1951.

Ernie and I met the very same week I arrived in Canada. He was one of the first faces in this new place and he, like Canada, would become home to me. We were married a year after I arrived.

After Ernie’s untimely death, Erev Pesach of 2012, I was overwhelmed with the outpouring of love that I received from the hundreds of March of the Living participants as well as the many people Ernie worked with in the construction industry. I knew the experience was so important for Ernie but I never fully understood the impact until I spoke with and received countless letters and emails from the children who were so deeply affected by him. It reinforced to me how necessary it was that he take that journey, despite how difficult it was. Ernie was remarkably positive and the effect he had on his March of the Living family proved that. He embodied strength and perseverance. Our own two children knew this better than anyone. Ernie was very protective and perhaps slightly too demanding of his children but it was out of sheer love and devotion to his family that he acted this way.

To ensure that many more students have the chance to bear witness to the remnants of the Holocaust and be encouraged to bring about positive change in our world, Ernie and I set up a gift, through the Jewish Foundation, to support the March of the Living in perpetuity.