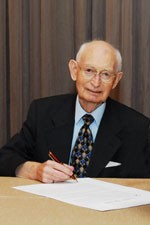 I was born in Magdeburg, Germany in 1923. My father was a military man, who served his country in the early 1900s. He was devoted to Germany, as any patriot would be. Even when Hitler rose to power, my father firmly believed that his “madness” would not last. My father, like so many German Jews, was sadly mistaken.

When I started primary school I was exposed to innocuous Nazism, comparatively speaking. At worst, some teachers began class with a salute to Hitler. But when I entered high-school, I was a marked target for many beatings because I was a Jew. Even though my family hardly observed any Jewish tradition, we were blatantly Jewish to our Aryan peers.

Many Jewish families scrambled to get their exit papers in order, while my father continued to believe that the bigotry would pass. Again, he was misled.

By way of tragedy, my life and my father's life were saved. In 1938, my elder sister who was living in London, died and my father left Germany to tend to her burial. While grieving alone in London, my father received news of the events of Kristallnacht and realized that he must get his only son out of Germany. With the help of a high ranking British military official — who was also an ardent Zionist and acquainted with my second sister who was living in South Africa — my father secured papers for my permanent departure from Germany.

I remained in England for nearly two decades. I had no money for a formal university education but I learned a trade involving industrial construction and eventually earned my qualifications to be a member of the British Institution of Civil Engineers.

I moved to Canada at the encouragement of a family member who felt it was a better place where my refugee and Jewish status could not hinder my chances of success. I made my way to Toronto, where — at the time —there was a need for civil engineers. I married my first wife and had two children, David and Anita. In 1974, I married Helen, my beloved companion until today.

I endured a lot of hardship in my life, but I never denied my Jewish roots. And that is why I chose to leave a bequest to the Jewish Foundation. I fear for our people and for Israel. But I wish to do whatever I can to ensure our survival.