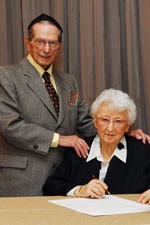 Philanthropy was not something we spoke about in my house when I was growing up. We weren't rich by any means. My father was the youngest president of his society — the Pride of Israel. He died when I was just a little girl, and my mother worked in a factory until I was 16 years old. But as far back as I remember there were tzedakah boxes in our house, and my brother and I were encouraged to put money in whenever we had it. It wasn't something we were forced to do - we wanted to.

I didn't become very involved with the Jewish community until I got married. My husband Phil was a member of B'nai Brith, and they were forming a women's chapter, so it was natural that I would get involved. It was through B'nai Brith that I was introduced to UJA. Years ago I even worked at UJA professionally. Now it's one of many Jewish organizations I'm involved with.

Phil and I both feel that it's our responsibility to give to the Jewish community. It's been more than 57 years since we started. We don't have any children of our own, so when we were making our will, our nephew suggested we leave a bequest to UJA Federation. I think Jewish people should look after the community first. We have a duty to support each other, both at home and in Israel. I hope that future generations feel the same sense of obligation.

I am happy to see young people getting involved today. When I was in high school I was one of only four Jewish students. I played volleyball and ran track and field. I didn't feel there was anti-Semitism, but it was there. One year I fulfilled all of my requirements to get a school varsity letter, but the teacher wouldn't give it to me because I was Jewish. So I confronted him, and I got the letter. I don't know where I got the courage from, but I think standing up for myself is part of my Jewish heritage.

Giving is part of my Jewish heritage as well. It isn't just about money. You have to give with your heart. Phil and I will continue to work in the community as long as we're able.