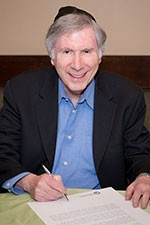 My grandparents made their way to Canada before World War I, so my four grandchildren, Kali, Nati, Rivi and Ellie are fourth generation Canadian Jews.  I hope they’ll have a sense of how privileged they are to have the freedoms my grandparents were seeking when they left behind sisters, brothers, parents and extended family to make a better life for their own children in a strange, new land.

I emigrated myself, on a much smaller scale, from Montreal to Toronto, in 1972. I was newly married to my wife, Linda, but our sons Mark and Terry were not yet born, and my sister, Susyn, as well as my parents, remained in Montreal.  By that time, I had received my M.B.A. from Cornell and saved some money to make my first trip to Europe and Israel in 1969, where the land and history left a strong impression on me.

I don’t consider myself a complex individual, but I’ve always had a soft spot for those in need, and the idea of helping people through education and training so that they can help themselves has always held great appeal for me.  According to Maimonides, the greatest act of charity is supporting a fellow Jew with a gift or loan to “strengthen his hand, so he no longer need be dependent on others.” I hope I accomplished that as a member of Jewish Free Loan Toronto for twenty-five years, and I’m proud that Terry is now its president.  His wife, Sara, is also active in our community.  My older son, Mark, is president of the Canadian Friends of Israel Free Loan Association, and received the Queen Elizabeth II Diamond Jubilee Medal for service to Canada.

To me, we all have a moral obligation to give back to the community. I served as treasurer of my synagogue, Shaar Shalom, for many years, and there are about twenty charities that Linda and I support annually, both Jewish and non-Jewish. My parents and grandparents didn’t have the wherewithal to give much financially, but they gave what they could.  Fortunately, I can honour my parents, Julius and Sophie, through UJA and other organizations, by following our tradition of tzedakah, so that our Jewish community, both here and in Israel, can continue to thrive and grow, as they would have dreamed, and as I continue to wish, through future generations.