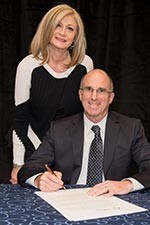 For Cecil and Elaine Brauer, community is where the heart is.

It is where their passion for the State of Israel is most evident and where their work in assisting the most vulnerable in Toronto's Jewish community is most beneficial.

Cecil's commitment to the Jewish people was ingrained in him at a young age by his mother, Anne, while living in South Africa. Born into humble beginnings, it was Anne's unconditional devotion to their rural Jewish community that taught Cecil the value of living a Jewish life, sparked his life-long love of Israel, and the daily reminder that there are people in this world who are less fortunate than him.

These life lessons were no doubt tested when Anne died, placing Cecil (11 years old) and his younger brother into a Jewish orphanage in Cape Town, where he spent the next two years witnessing firsthand how a strong Jewish community can and should take care of its own.

Since moving to Canada in 1980, Cecil has been an active member of Toronto's Jewish community. For Cecil and Elaine, this work meant forging a close and meaningful relationship with UJA Federation of Greater Toronto, which represents for them the organization that binds Toronto's thriving and diverse Jewish community.

Looking towards the future, Cecil and Elaine are excited to continue their work building a sustainable Jewish community in Toronto... one that leaves nobody behind because of their particular circumstance in life; a community where everyone in need has the opportunity to receive help and a community that truly understands the importance of giving back.

"I hope my story inspires others to give back to the Jewish community," says Cecil, who admits his family's support of his and Elaine's philanthropic ways is unwavering and motivational. "All of us must always think of the less fortunate, to protect the vulnerable and to keep in mind strengthening the relationship between Canada and Israel."