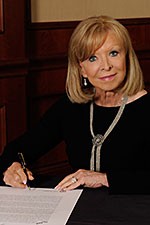 Among the many traditional Jewish values my parents, Jacob and Esther Perlman, instilled in me was a dedication to the practice of tikkun olam. As a child I attended a gathering of the Lagover Sick Benefit Society, to which my parents belonged. They made every effort to contribute to the society's fund, even with their own share of struggles and challenges as Polish immigrants in Toronto. My parents’ commitment to help their lantzmen was second nature.

Another powerful childhood memory shaped my community involvement. I distinctly recall my parents’ deep anxiety over letters of desperation received from loved ones back in Poland. Eventually, the letters just stopped coming. My parents were devastated upon learning the fate of their family members at the hands of the Nazis, and at their own inability to help. This awoke them to the harsh reality that we must never be complacent; we must do for ourselves and help our fellow Jews.

My late husband, Lou, of blessed memory, believed — as do I — that it is a responsibility for us to do for others whenever and however possible. As a result of hard work and a measure of success, Lou and I were able to support an array of charities and projects — many in the areas of education and health care in Canada, the United States, and Israel. We were very proud of the Lou and Yetta Bregman Fund in Neonatal Intensive Care at the Shaare Zedek Medical Center in Jerusalem. The Bregman Scholarships at the Rotman School of Business Management, University of Toronto, and the Wharton School of Business, University of Pennsylvania, were established with my son Michael. We have also participated in the purchase of land for the visionary Lebovic Jewish Community Campus in Vaughan. At the Mount Sinai Hospital in Toronto, the Louis Bregman Cardiac Critical Care Unit has been dedicated to Lou’s memory.

Our family have followed the example we set. Our son Michael’s bar mitzvah was at the time of the Six Day War, and he donated his gifts in support of Israel — a tradition that my grandchildren have continued. We all believe that education and a commitment to Israel are the foundations of Jewish identity. It is for this reason that my grandchildren have gone on the Birthright program as they have come of age.

I am very appreciative of the thriving community in which I live and the opportunities that my philanthropy has afforded me. I have taken amazing trips to Jewish communities around the world and visited our precious homeland of Israel numerous times, and the remarkable people I have met through these endeavours have enriched my life immeasurably. I am very grateful for my many blessings and thankful for the extraordinary family Lou and I have created — four wonderful children: Michael, Caurie, Jodi, and Howard, their partners, and our eight incredible grandchildren.

I am proud to be Jewish and a part of this community. My children and their children are actively supporting and improving the world in a meaningful way. It is humbling to think that my parents’ influence is very much alive three generations later. Now my endowed Lion of Judah gift ensures that my support continues indefinitely.