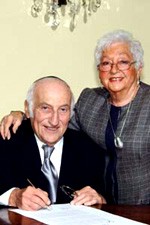 My parents came to Toronto from Jerusalem in 1906. They loved Israel, but couldn't make a living there. I was born and raised on Euclid Avenue - the youngest of nine children. My father was a shochet. He died when I was very young, so my mother took over the business, operating it until my brother became a shochet. Although she was busy raising a family and running a business, she had time to be President of the Ladies Auxiliary of our shul on Palmerston Avenue and active at the Cecil Street Hospital — the forerunner to both Mount Sinai Hospital and Baycrest Centre.

I grew up in an observant home, attended a private cheder and later studied at the Yeshiva on D'Arcy Street. Jewish life and learning were always very important to me. In fact,I met my wife, Shirley, at a conversational Hebrew class.

After we were married, Shirley and I spent the summer of1949 in Israel. We thought about staying, but life was still very difficult there. We returned to Toronto, where our daughter, Golda, and son, David William were born. But we always loved Israel and in 1967 purchased an apartment in Netanya.

I've been in the financial planning business for 60 years. About 30 years ago I started setting up charitable life insurance policies for many of my clients — including us — naming UJA Federation and other Jewish organizations as beneficiaries.I felt annual giving wasn't the whole answer because it didn't address the needs of the next generation. An endowment is an investment that helps secure the future.

I've always felt if you live and earn a livelihood in a community, you should support it. I chaired UJA Federation's Insurance Division, was President of Shaarei Shomayim Synagogue, and was involved with hospitals and my kids' school. I am particularly proud to have been named Man of the Year in 1985 by the Professional Advisory Committee of the United Jewish Welfare Fund. My children have followed my example. They are my partners in the family business and have taken on leadership roles in the community. I know their children, our four grandchildren are learning these same lessons.