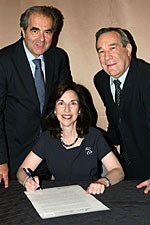 Our parents were a product of their times. David Brown grew up in the small town of Wodizlaw, Poland and lost his own parents and siblings, who perished in the Holocaust. Following his sole surviving brother, he moved to Toronto to start a new life. There he met and married Rose Weisbloom, who had left Poland and arrived in Toronto during the Depression. Times were difficult and at an early age, she had to leave school to work and help support her family.

David and Rose Brown, like many of their generation, struggled tirelessly to be able to give their children the opportunities they had not had. At great personal sacrifice, our parents sent us to the Associated Hebrew Day School. Giving their children a Jewish education was simply taken for granted, what today we would call a “priority”. We also knew that in our home, tzedakah was part of everyday life. Our parents’ generosity was never limited by their financial circumstances, as there were always those whose needs were greater than their own. With time, the business they built together flourished and they were able to visit their beloved Israel often. They were also able to share their good fortune and contribute to many Jewish organizations, which they did with a sense of responsibility and gratitude.

Morley, Nathan and I are a product of our times and we have enjoyed the blessings of a privileged life. By establishing the David and Rose Brown Endowment Fund at the Jewish Foundation, we wish to honour the memory of our parents and fulfill what was most important to them – supporting Jewish education and Israel. We have tried to instill in our next generation, Ira and Joanna Lindenberg, devotion to community, tzedakah and love of Israel and the Jewish people. We hope that their grandparents’ values and good deeds will be their legacy and inspiration, as they have been for us.