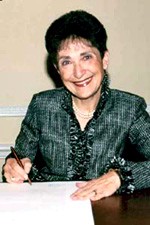 I come from a small Jewish community in New Brunswick where we didn't have an organized structure for charity, but every year at Rosh Hashanah, the Rabbi had a fund people could contribute to for those less fortunate. I also saw the roots of Jewish education in our home. My mother started a Jewish pre-school and instituted a Bat Mitzvah program in an Orthodox environment, because it was important to her for her daughters to learn and celebrate their rights of passage.

The formation of the State of Israel also had a huge impact on me. My family became very Zionistic and as a result I went to Camp Kadima. There were Madrichim and Shelichim from Israel, who were the most wonderful role models.

One of the reasons I moved to Toronto in 1965 was to give my children a higher quality of Jewish education. Educating children in Jewish belief and as a way of life is what keeps our future strong.

The more I saw of the infrastructure of our community here in Toronto and the effort it took to provide social services on so many levels, the more I became involved.

Because of my commitment to Jewish education, I began my service in communal work by serving as president of the Boardof Jewish Education. From my background in social work, I know how dependent people are on the vital human services provided for by agencies supported by the community and I wanted to do whatever I could to be a part of that support. I went on to become president of Jewish Vocational Services, one of UJA Federation's beneficiary agencies, and as well, worked locally and nationally with Canadian Jewish Congress. The crowning glory of my many years of involvement was serving as president of UJA Federation in 1994.

Contributing to Jewish causes is part of who we are. Now, every Friday night in our home, we contribute to a Tzedakah box. I think sharing these family values with children and grandchildren is the first step in building a strong Jewish community. We need to keep our organized fundraising efforts ongoing, to support Israel and to ensure our Jewish continuity.