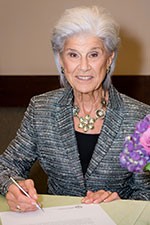 You would be forgiven, on first meeting Beverley Burdeyney, for feeling you had just been confronted by a force of nature. Her zest for life, and for cherishing each day she is given, fills any room she occupies.

Beverley, by her own account, has “a nose for finding solutions,” and because she believes that “to be a Jew, you need a community,” she has made it her personal mission, even while maintaining a full-time professional life, to be responsible, to volunteer, and to “make it happen” across many decades of devoted community service.

Her volunteer career began at Baycrest some thirty years ago, where she recruited people to work with the aged, received the first 500 hour service pin, and was recently honoured as a Woman of Baycrest for creating awareness and raising funds for research on Women’s Brain Health. UJA and B’nai B’rith have also benefitted from Beverley’s energetic fundraising. A founding member and director on the board of The Village Shul, she has organized tribute evenings, and was deeply committed to a campaign to acquire the first Sefer Torah for the synagogue. Her portion, she decided, would honour her first grandchild. No baby was on the way at that moment, but by the time the Torah scroll was completed, her first grandson, William, was born. Such is the force of her will!

She has gone on to dedicate a column of text for a Sefer Torah housed in the Tomb of Rachel in Israel. She has also been responsible for acquiring the crown for a Sefer Torah, written in memory of Rebbetzin Yehudit Kenig, that rests in the Great Breslov Synagogue in Tzfat. Beverley is appreciative that her daughter, Amalia Berg, has been instrumental in assisting her to support the causes she believes in.

Tel Aviv University named Beverley an Honorary Director for her work in establishing the First Cornea and Stem Cell Research Program there. “These things fall in my lap,” she asserts. “There’s a need. They ask me. I do it. It’s the right thing to do.”

Beverley has been granted much recognition for her good works, but is careful to credit “many good teachers” and a strong belief in God for her positive attitude and abilities to facilitate and influence. “I try to live my life with integrity, gratitude, kindness and charity, and I hope that my grandchildren, William, Rachel, Leanna and Zoe have learned from my example that being a Jew means being responsible for each other.”