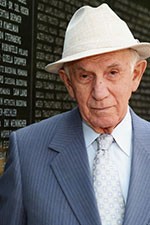 My story begins in Storozhynets, Bukovina, in north-eastern Romania. I had two brothers and my parents ran a successful wood and flour mill business. On June 28, 1940 the Russians occupied our city, nationalized our business, keeping my father as a temporary adviser. I became a bookkeeper in a Soviet bank.

When the Nazis came to power in June 1941, the Russians retreated and we were sent home. Our neighbourhood soon became a Jewish ghetto. We heard that Jews elsewhere were being shot or sent to camps, our ghetto was liquidated and sent to camps. Those who could not walk were shot on sight. In December 1941, among 940 prisoners, we arrived in Budi, Transnistria. By Spring 1942, only 120 survived the harsh winter conditions. For three years I was shipped from camp to camp and witnessed human brutality that should never be repeated. We were liberated by the Russian Army in April 1944.

In Transnistria, 430,000 Jews died from starvation, typhus, pneumonia, or brutal shootings. It was the largest area of killing in the Holocaust consisting of 132 camps. Many refer to Transnistria as the Romanian Auschwitz. I lost 28 members of my Bukovian family in Transnistria and an additional 150 family members in camps in Poland. In my immediate family, only my father and I survived.

After the war, I married Rosa, who I had met in Transnistria. We lived in Vatra-Dorna, part of Bukovina and had two daughters. In 1954 the Romanian communist regime would bring me further hardship and suffering. I was arrested as a “counter revolutionary”, judged by a military court and was imprisoned for eight years. In order to survive without me, my wife rented the bedrooms in our home during the tourist season, while she and our daughters slept together in a small room.

I was finally released in 1962, by the influence of the Skulener Rebbe who paid off the Communists. My wife went looking for me and unable to locate me, she boarded a train to return home, filled with sadness, only to find me sitting in the same compartment that she was assigned. It was bashert.

We left Romania soon after my release and settled in Canada. I worked in the schmatah business, became an office manager, established a life of comfort and remain ever grateful to Hashem for life and freedom. I became a father-in-law, a grandfather, and I am now a great-grandfather to 10. They are my greatest pride and joy and my inspiration. They are the future of our community and I am doing my part to ensure the community not only survives, but thrives. Am Yisrael Chai!