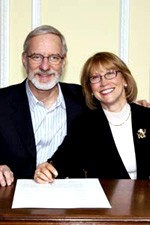 My parents, fleeing Germany in December 1939, met on the boat to New York. They soon married and settled in Allentown,Pennsylvania, where my brother and I were born and raised.

My parents worked hard as professional photographers. Jewish life held an important place in our home. Friday nights were celebrated with candles, challah and often, services at our Reform synagogue. I survived Hebrew school, despite being the only girl in a class of 13. In high school, I was president of B'nai Brith Girls, active in athletics and at the Jewish Community Center. I worked several summers at Camp Echo Lake in Lake George New York, where I made friends with many Montrealers, one of whom would eventually become my brother-in-law.

After university, I married and immigrated to Montreal. In 1976, like many young couples, we moved to Toronto. Once settled, I became involved in the Jewish community where there were many opportunities available to me - each new responsibility led to another challenge.

Over the years I have been very active with Hadassah-WIZO, locally and nationally, UJA Federation and my synagogue, Temple Sinai. I have served as a Board member and officer of Ve'ahavta:The Canadian Jewish Humanitarian and Relief Committee, and Kolel: The Adult Centre for Liberal Jewish Learning. In 1993, through the auspices of a Hadassah-WIZO study program that culminated in a mission to Israel, I celebrated my Bat Mitzvah. I participated as a chaperone on the 1994 March of the Living and chaired the 1997 UJA Federation Women's Campaign & Advocacy. As a volunteer I am empowered to make a difference in my community.

My love of Israel and my passion for Jewish life and learning are constantly with me. Integrity along with Jewish values and practices has always been an important priority in my life and I continue to study weekly and attend synagogue regularly.

My commitment to the Lion of Judah Endowment expresses my gratitude for the blessings I have enjoyed and it ensures that the values I hold dear will continue as my legacy —l'dorv'dor.