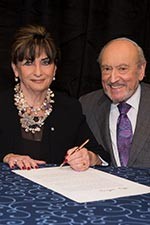 Judy Feld Carr is a former university lecturer in musicology and music education, who spent almost three decades secretly arranging the rescue of the bulk of the Syrian Jewish community, for which she was awarded the Order of Canada, the Presidential Medal of Distinction of the State of Israel, as well as honorary doctorates in Canada and the United States.

I was born in Montreal, grew up in Sudbury, a child of a family with strong Jewish traditions. I graduated from the University of Toronto with my Bachelor and Masters degrees.

In 1973, my late husband, Dr. Rubin Feld Z"L, and I heard about the oppression of Syrian Jews in their own country, at a time when nobody knew about their plight.

After an almost impossible communication with Syriaâ€™s rabbis, we sent much needed religious books and artifacts to a community facing arbitrary arrests, torture and death.

With three young children to raise alone, those activities were fortuitously transformed into a secret rescue of people, through bribery, paying ransoms and smuggling over a period of 28 years. By the count of others, I was successful in bringing to freedom over 3,228 Syrian Jews.

Secrecy of the operations was essential, as any leak of information would have ended the dangerous and complicated mission.

Subsequent articles in the Arab press accused me of being a spy for Israel.

My fears for myself and my family, which, after I remarried, include my husband Donald Carr and three additional children, have been ever present.

Being part of the injunction to help other Jews has been absorbed by our people over centuries. â€œKol Yisrael Arevim Zeh Lâ€™zeh.â€ I am secure in the knowledge that there are, already, succeeding generations of those Syrian Jews who live in freedom as proud Jews, because I was privileged to lead their forebears from bondage.