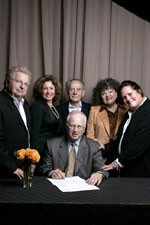 The Chenstochover Aid Society is a mutual benefit society, which was founded in Toronto in 1914, by a group of newly-arrived immigrants from the Polish city of Czestochowa. The Society was originally formed to provide assistance to its members, who fell ill, and required financial assistance during times of need.

After the Second World War, many survivors of the Holocaust, who lived in Czestochowa, and its environs, immigrated to Canada and were happy to join the Society; not only to take advantage of the sick benefits, which were provided through the Society; but also to meet with their contemporaries in a collegial setting. For many of these survivors, the Society provided a sort of familial support, which had been lost during the Holocaust.

As time passed, the focus of the Society became more directed at helping meet the needs of the Jewish community in Toronto, and supporting the State of Israel. Our activities continue to evolve as we seek to undertake new charitable opportunities; however our main purpose, as always is to remember, and honour, those who perished in the Holocaust, and to give continued support to worthwhile Jewish charities, Jewish educational institutions and Israel.

Over the past two decades, there has been a further evolution of the Society, with children of survivors becoming members as well. This influx of youth (over sixty children and spouses of children) has allowed the Society to move forward in many ways, while still remaining rooted in its heritage. The Society’s membership also had doubled instantly in 1999, with the admission of wives of members (which until then was limited to males only) as full members.

Today, our Executive, made up of survivors and children of survivors, represent our membership, and work together to maintain a link with the past, in order to ensure continued existence of the Society in the future. It remains the duty and purpose of our Society to consider requests for charitable donations, to maintain our two cemeteries, and to support, expand and foster our membership.