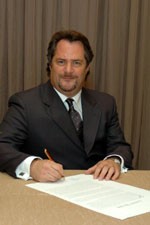 My parents, Helen (Rosen) and Gordon Clarfield z”l met in 1951, and were engaged three weeks later. They married in Toronto on June 8th, 1952, then lived, and loved, together for 41 years, until my mother passed away in 1993. My dad kept on loving her until he too passed away, in June 2004. They left behind 2 sons, 2 daughters and 2 grandchildren.

My parents shared a familiar story with many Jewish people of their generation. Their families came to Toronto from Poland in the early 20th century and they grew up in Kensington Market. They were the first generation that made the transition from shtetl life in eastern Europe to modern, urban life in Toronto. They were a bridge connecting traditional Jewish values with contemporary Canadian culture.

My family participated actively, and have been both the lucky participants and dedicated supporters of these programs in the Jewish community. My parents' generation was dedicated and strong enough to have envisioned, built and cultivated these institutions. Our generation has been lucky enough to take them for granted as being part of everyday life.

I think my parents' story can provide some guidance. My parents loved and believed in our community, and did everything they could to support it, including providing a legacy through UJA Federation, as a way to ensure these combined Jewish and Canadian values.

I hope our community will continue to thrive, and my parents' commitment will live on for generations to come.