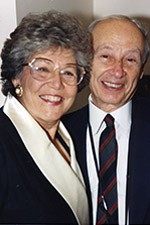 My father, Ben Clodman’s life wasn’t all that unusual or remarkable. Fortunately, he did not live through the Holocaust or survive other dire circumstances. My dad was born in Toronto to Russian immigrants, the fourth of six children. He was raised by non-observant parents to the extent that, on the day of his Bar Mitzvah, they wished him well as he went to shul with his grandfather! Despite this, my father grew into a man who personified two very important aspects of Judaism: a love of the Yiddish language and culture and a giving nature that is beyond compare.

A pharmacist by profession, my father had a deep-rooted passion for the Yiddish language and a passionate commitment to keeping it alive. He produced and acted in various Yiddish plays, taught Yiddish classes, and was actively involved in the Yiddish community. He loved to take centre stage and people loved to watch him tell Yiddish jokes. Not many people had his natural ease and flair for entertaining an audience. Even if one did not enjoy or understand Yiddish, they would be able to appreciate it just by watching him perform.

The second characteristic that my father embodied was something that set him apart from anyone else I have ever met. My dad would do anything to help his family, friends, and even strangers. He always thought of what he could do for others and never wanted any recognition in return. After one of his Yiddish courses came to an end, he asked his students to contribute a nominal amount to leave something for the janitor to show their appreciation – definitely not a common occurrence! My father’s sense of “tikkun olam” came as naturally to him as breathing.

Family was the most important thing to my dad once he finally got around to having one! He was 43 years old (a well-established bachelor!) when he finally married my mom, Joyce Papernick. Together they raised three daughters. I am not being biased when I say that he was the kindest, most patient father anyone could hope to have. And this giving nature spilled over into the lives of anyone who had the good fortune of knowing him.

The epitaph on my father’s tombstone reads, “A heart of gold, a passion for life, he made the world a better and kinder place.” Although it’s true that my dad did not change the entire world as did many of our great leaders, he definitely made a difference in his part of the world. His zest, warmth, and kindness will forever be his legacy.

As told by his daughter, Tami Osiel