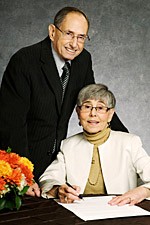 May’s parents, Sam and Manya Lipshitz established an endowment at the Jewish Foundation of Greater Toronto. After their deaths we became the trustees of this fund. As such, we wanted to keep their legacy alive - their legacy of support and leadership towards promoting Yiddish language, Jewish education and culture, and their life-long struggle for social justice.

Both were greatly respected teachers and activists. Their extensive travels included visits to a number of Eastern European countries, and many visits to Israel. During these trips they met with prominent Jewish writers, artists and political leaders. Sam and Manya’s valuable work in the Jewish community in Canada was strongly influenced by these encounters. Furthermore, they were hosts to many of them, all of whom were strong advocates for social justice, and believed in the important role that their Yiddishkeit played in enhancing these goals. Our lives were greatly enriched by being included in these gatherings.

We are both Family Physicians. In our practice in Downsview and later as faculty members in the Department of Family Medicine at McMaster University, we were committed to integrate into our health care and teaching, recognition of the importance of social factors such as poverty, inequality, gender, racial and ethnic discrimination, as well as biologic factors, in affecting a person’s health status. Our approach was strongly influenced by the values passed on to us by our parents.

In our Toronto practice we dealt with many Holocaust survivors. We were horrified to learn first-hand of their experiences, and realized how this had impacted not only on their health and quality of life, but on that of their children. We marveled at the strength of these survivors. From them we learned how critical it is to do everything possible to preserve our Jewish language, tradition and culture.

It is because of this belief, as well as the legacy handed down to us by our parents, that our commitment to Yiddishkeit and its values is such an important component of our lives.