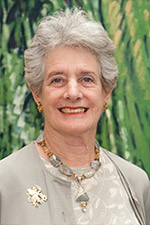 My husband Stuart and I both grew up in homes where community service and philanthropy were given high priority. Stuart's parents, Nina and Harry Cohen were leaders in the Cape Breton community and my parents, Olga and Arthur Pascal were part of the top leadership in Montreal.

We moved to Toronto in 1978 and because of our willingness to participate in the Jewish community, we were warmly welcomed. Within a year, I was on the Board of UJA Federation Women's Campaign & Advocacy and subsequently joined the Auxiliary boards of Mount Sinai Hospital and Baycrest Centre for Geriatric Care.

The Pascal Family Foundation, of which I am a member, is based in Montreal. We felt that it was important to have something in our own names in our new home in Toronto. After discussing it with our children, Kathy, still in Montreal and Michael, now in Edmonton, I decided to endow my Lion of Judah gift so that in years to come, no matter where we live, we will feel part of the Toronto Jewish community.