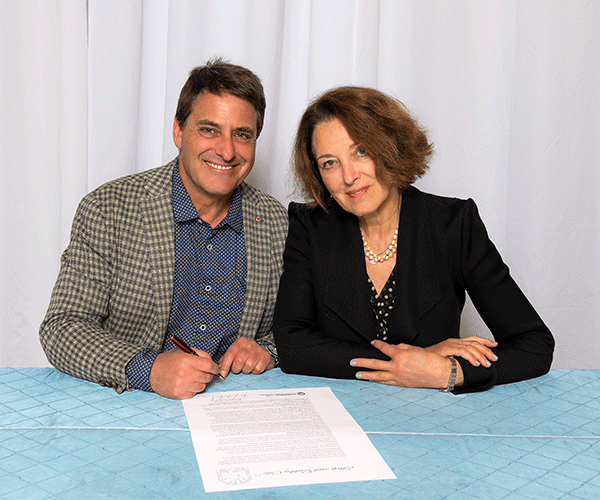 Ellen and Albert Cole each grew up in the neighbourhood surrounding Toronto’s Harbord Collegiate, where they met as teenagers and became sweethearts soon after. Tubby was the captain of the football team and Ellen was enamoured with his athleticism and charisma. Tubby was equally smitten by the beautiful Ellen and the two began a courtship in university that would lead to marriage and a cherished partnership lasting over 60 years.

As a young man, Tubby took over his father’s store fixtures business with a primary focus on restaurants and diners in Toronto. His brother Joe joined him in the business one year later.

Initially, they tried their own luck in the restaurant business. However, soon after, they founded Book Fair and built the business, opening and operating five book stores for many years. Ultimately, they found themselves in the construction and property management business.

Tubby’s success was built from a combination of street smarts, determination, and an easy-going charm that attracted business associates and friends. Although well known for his humour and practical jokes, Tubby also had a serious side that was founded on a strong sense of devotion to family and pride in his Jewish identity. Ellen was the perfect counterpart to Tubby’s animated personality and had a beautiful smile that could light up an entire room. She grew up the eldest of three children, and often looked after her younger brother Lionel while her parents worked at the family-owned dress shop on Yonge Street, and custom lighting shop on the site where Toronto’s City Hall now stands. Ellen was deeply nurturing and found joy in caring for others. She was also an athlete and held a degree in physical education. A life-long learner, Ellen went back to university in her 50’s and constantly strived for self-improvement. She had an artist’s sensibility, with a deep love and appreciation of beauty, aesthetics and style.

As a couple, Tubby and Ellen were truly a dynamic duo. They were active and adventurous; always deeply devoted to each other, to their family and to their community. Committed to one another, creating a life of meaning and love, they raised their three children in a warm Jewish home. In later years, they took the extended family, including their beloved grandchildren on a trip to Israel.

Tubby and Ellen also strove to share their good fortune with others. Tubby was active in many community organizations, including UJA, where he chaired the Major Gifts Division and Annual Campaign. Ellen worked tirelessly supporting Tubby’s efforts, as well as volunteering at the Baycrest Museum and working along with her sister-in-law Helaine at the Hadassah Bazaar, overseeing all clothing donations and sales. On his passing, Ellen established a scholarship at their alma mater, Harbord Collegiate, in memory of Tubby, to be awarded to a top male athlete. There will now be a scholarship for a top female athlete established in her memory, as well.

Tubby and Ellen built their lives on a foundation of caring and devotion to each other, their children and grandchildren. This gift to the Jewish Foundation is in honour of the values that they held so dear.