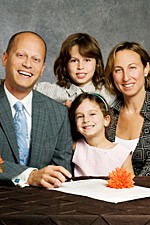 My memory, and what initiated my sense of personal responsibility to a larger community, started when I was six years old.

For my 6th birthday, rather than the usual act of gift giving, I asked my invitees to make a contribution to the Junior Red Cross. The response from my friends and their parents was very gratifying to me, and for my first charity.

That act of charity by a family child was repeated a generation later when our two sons, Robert and Jamie, demonstrated their concerns for less fortunate people in so many gratifying ways, including their working as spring garage cleaners as youngsters, with the earnings being contributed to charities.

These laudable traits made me wonder if tzedakah might have a genetic origin. So I began to search my memory for the genesis of the charitable deeds, within our respective families. I remembered that my father had told me that when he was a young immigrant to Canada, he was fortunate to have had many people, whose acts of charity and kindness gave him the opportunity to compete, and to succeed. In appreciation, my father became and remained committed to acts of generosity to and for others in need, for the rest of his life. His fatherly advice and direction always included the imperative to help people in need, but always in a manner that would minimize the notoriety of the giver, while avoiding, if possible, any embarrassment to those who received. The respectful recollections of his advice, and his actions, continue to motivate and stimulate the honouring of his memory, through the sharing of our good fortune with people in need.

My mother also played a role in nurturing these moral obligations. Shortly after the end of the Second World War, she heard about a group of young Jewish men - Holocaust survivors - who had come to Canada, and were earning their landed immigrant status at a lumber camp north of our home town. She arranged for them to enjoy the High Holidays as guests at different Jewish homes, because they had no family with whom to share. In later years, I learned that some of these men had done remarkably well financially, and had shared their good fortune with the other, less fortunate, survivors. Having been the beneficiaries of the community tzedakah, they kept that spirit going through their deeds of kindness and sharing.

Lorraine’s parents also played a part in our family's sense of obligation. They were both very much involved with the Jewish community. Her mother was active with Hadassah and her father was supportive of many of the community's charitable organizations. He was instrumental in establishing the Men’s Service Group at Baycrest, for which he was later honoured as "Man of the Year".

As a part of the family's customs and respect for tradition, every Friday night everyone in Lorraine’s family put money in their JNF box, as a sign that giving is a family obligation, even among the young. That JNF box remains in our home today, and is a tribute to those values. These life lessons have had an important influence on me, and on our family. We are very comfortable with our obligations, our responsibilities and with the privilege and honour of being able to fulfill the mitzvah of tzedakah.