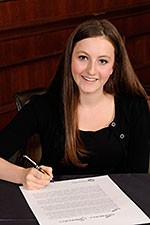 When I was a student at The Leo Baeck Day School, my principal’s newborn daughter was gravely ill with a life threatening cancer. Many students banded together to help raise funds for pediatric cancer research in Lilah’s name. This was the first cause which I was closely and personally connected to. Lilah’s Fund is still in existence, has raised significant funds, and best of all, Lilah has made a full recovery!

This individual act of giving helped me understand the value of tzedakah on a whole new level. The spark was lit! Originally, I expected to make just a one-time donation to the community with the money I had received in honour of becoming Bat Mitzvah. Instead, I established a fund at the age of thirteen, becoming a contributor to the Jewish Foundation’s B’nai Tzedek Teen Philanthropy program. Little did I know that, thanks to the encouragement of my parents and their matching of my gift, I’d be involved in something much more substantial and personal.

I soon realized that with my B’nai Tzedek fund I was not only making a gift to the community, but a long term financial investment with a lifetime payout. My fund would continue to grow and each year I am able to designate support to the causes that are important to me.

Now, more than six years since the fund was established, I have learned about and contributed to organizations such as United Jewish Appeal, Reena , Zareinu, Jewish Family and Child, and Lilah’s Fund, to name a few - and my fund continues to grow!

Tzedakah has always been important in my family, and my two younger brothers — Lee and Noah — are also B’nai Tzedek participants. Thanks to my involvement with this amazing program, my social consciousness has been heightened and I have become a more active volunteer. I co-chaired the B’nai Tzedek program in high school and have been a lead participant in the launch of its website and continue to volunteer with the Jewish Foundation whenever I can.

Today, I am a member of the Tzedek committee at Queen’s University Hillel and am involved with Kingston’s Winter Adapted Games (WAG) for children with disabilities, as well as organizing Queen’s Conference on Philanthropy. All the while, my B’nai Tzedek fund continues to provide for causes of my choice, indefinitely.