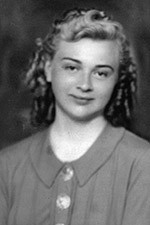 As the sole survivor of her family, the Holocaust shadowed over the entirety of my mother’s life. Despite all the hardship she endured, she was able to appreciate the beauty of life. It is my hope that through her fund, her memory will bring light into the lives of other Holocaust survivors.

Ilona was born in 1922 in Zenta, Yugoslavia, into a loving family and a privileged life. But as the dark storm of World War II gathered over Europe, the life Ilona knew came to an abrupt end.

She and her two sisters went into hiding with three separate families. Tragically, the two youngest girls were captured and sent off to Auschwitz. My mother remained hidden until she was rescued by the son of a local landowner, Stephen Fekete, who took her to Budapest. During their time together, Stephen fell in love with Ilona and proposed. Separated from her parents and alone in the world, she readily accepted. She once confessed to me, “How could I have said no to a man who risked his life to save my own?”

After the war, my brother and I were born, and our family settled in the small town of Szentes, Hungary, where we lived in poverty under the Stalinist regime. My father became a depressed alcoholic after losing his “place in life,” and it was left entirely to my mother to hold the family together. In a place where violence and cruelty were commonplace, she transformed our miserable surroundings into a veritable heaven for my brother and I. She renovated our home, created a beautiful garden and instilled in us the importance of reading, the healing powers of music and the beauty of nature.

In 1956, soon after Russian tanks rolled into Hungary, our family broke up. Mother, who could not live with Father’s drinking and abusive behaviour, finally divorced him upon learning of his infidelity.

Mother’s life ended in a hospital with terminal lymphoma. She remained positive to the end and died in dignity and peace. At her bedside, I realized that all my life she taught me how to live, now, she was teaching me how to die. Her last words were typical of her life and of her character. She gazed out the window, looked at the sunrise and, with her last breath, whispered “how beautiful.”

Mother was a virtuous woman as described in the Proverbs; strength and honour were her clothing, she spoke with wisdom and kindness, and we, her children, arise and call her blessed.

As told by her son, Michael Fekete.