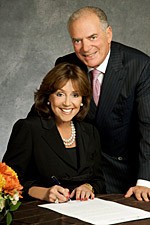 My husband, Phillip, and I grew up in different countries — he was from Montreal and I was born and raised in New York. We both experienced our share of life challenges as young people including previous marriages, but when we blended our two families we merged our tried and tested values. At the top of that list was our commitment to family and to community.

We both grew up as rather secular Jews but we never abandoned our faith. Phillip’s maternal grandmother was the first President of Hadassah WIZO in Quebec and his father was President of their local synagogue and very active in the local Y. In retrospect, they were clearly the source of what influenced Phillip to give back to the community.

When Phillip and I moved to Toronto we began supporting various charities in our community. We were not active volunteers but we always made certain that our contribution was significant to a myriad of causes, among them, UJA and Israel.

We believe strongly that as long as there are those in need in our community, we have a responsibility to help. And we have made certain that our children and grandchildren understand this and also participate charitably. They have been raised with many wonderful advantages, but at the same time they have been raised to realize that it is not an entitlement — they must, in turn, give back.

I chose to endow my annual campaign women’s gift because I think it is important to provide for the future as well as the present. Selfishly, it gave me a sense of immortality but also I know that for many years I will be contributing to Israel and to the Jewish community. I have tried to do my small part to help look after future generations and at the same time set an example for my children and grandchildren in the present.

I do not know what the future has in store for our Jewish community or our beloved Israel, but I, like so many, have affirmed my ongoing support through my gift.