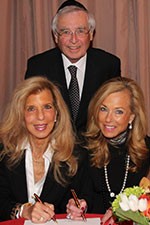 Anne Z"L and Charles Z"L Dubin were a charming, magnanimous, influential couple. They were highly respected legal professionals and philanthropists. Charles, in particular, is remembered as one of Canada’s most revered legal minds. To us, he was simply Uncle Charles.

Born and raised in Hamilton, Uncle Charles earned the Gold Medal at Osgoode Hall Law School in Toronto in 1944. He was teaching there when he met a brilliant young student named Anne Levine. After she graduated with the Bronze Medal, they married and remained incredibly close throughout their 57 years together.

Their remarkable work ethic and passion brought about countless achievements in private practice. When Uncle Charles was asked to join the Ontario Court of Appeal in 1973, it troubled him to give up the work he loved, but he felt duty bound. He would go on to become Chief Justice of Ontario and is perhaps best remembered for chairing the Dubin Inquiry into drugs in Canadian sport. After retiring from the bench, he continued to advise clients and mentor young lawyers. His induction to the Order of Ontario and the Order of Canada underscore his profound impact.

Uncle Charles and Anne never had children, but he was extremely close to us. He used to say, “My sister lent me her children.” He showed us tremendous love and affection but also expected us to work hard and succeed. He had a way of making everyone he spoke to feel special, whether they were family, friends or honourable jurists.

As a couple, they were extremely social, intellectual and great fun. Anne was a natural tennis player and golfer. Despite his attempts, Uncle Charles was not so athletic. Instead he preferred to spend his leisure hours watching his beloved Argos or pouring over legal briefs.

They also believed passionately in giving—quietly. They were exceptionally generous but never wanted the spotlight on themselves.

Anne passed away in 2007. When we lost Uncle Charles 14 months later, we were certain he died of a broken heart.

They left many endowments to hospitals, universities, the arts and the Jewish community. When the Jewish Foundation approached us, we were pleased to dedicate some of the funds to create a playground for underprivileged children.

Uncle Charles and Anne are so etched in our hearts they are part of our being. Their influence made us strong, hardworking women. We are incredibly proud to be part of their legacy.

As told by their nieces, Francie Klein and Marcia Robinson