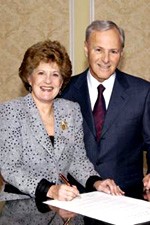 One of my earliest memories is of my grandparents, Rose and Joseph Herman, raising funds for Palestine. Framed certificates from the Jewish National Fund and Hadassah- WIZO hung proudly in their home, the same home where the inaugural meeting for the establishment of the Mount Sinai Hospital on Yorkvill eAvenue was held.

These values of continuity and Tzedakah were passed on to my parents, Allie and Bernie Herman, whose philanthropy and leadership in the United Jewish Welfare Fund, State of Israel Bonds, Canadian Hadassah-WIZO and the Mount Sinai Hospital were exemplary.

With this legacy imbedded in my soul, I too, have attempted to bolster our Jewish community and Israel by assuming leadership roles in UJA Federation, the advocacy campaign to liberate Jews from the Soviet Union and other worthy Jewish organizations and institutions. The skills that I have acquired and the remarkable people I've met through these endeavours have enriched my life immeasurably.

Zionism was woven into the fabric of my husband Elliott'sfamily. A branch of the family is still living on the Kibbutz that his uncle, Joe Eisen, helped to found almost sixty yearsago, prior to fighting, along with his brother Bob, in the War of Independence in 1948. In Toronto, Elliott's parents, Selma and Dave Eisen, were leaders in both synagogue and Jewish communal life, and Elliott has directed his energy and expertise towards several local Jewish social service agencies and the annual UJA Federation campaign.

On the occasion of our marriage, Elliott and I established an Endowment Fund at UJA Federation, earmarked for educational projects in Israel. We are delighted to see it grow and flourish. Today, we work together to enhance Israeli culture, through our involvement with the Israel Museum in Jerusalem.

Elliott and I feel blessed to have been nurtured by parents who were passionate Zionists and we have endeavoured to impart this legacy to our children. To date, two of our four daughters assume leadership positions within the Jewish community and they wear their Lion of Judah pins with pride. I suspect that one day, like I, they will endow their pins, to help ensure Jewish viability in Toronto and in Israel, in perpetuity.

One has only to think of the sacrifices made by Israelis on a daily basis to recognize how privileged we are to be in a position to strengthen our ancestral homeland in many meaningful ways.