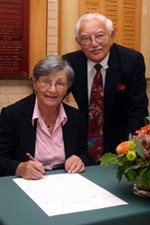 Steve and I are both Holocaust survivors, he from Hungary and I from Slovakia.

My family and I were first to come to Canada in 1948. We were one of the very few families from that country, who stayed together and survived. This was due to some foresight on my father's side, much good luck and some help from righteous people. Even while we were in constant danger, my parents were busy sending food parcels to concentration camps and trying to save whomever possible.

After the war I became active in Hashomer Hatzair and wanted to make aliyah, but my father insisted on keeping the family together after our ordeal, so we waited for our permit to Canada. We got out of there just before the Communists tookover Czechoslovakia. When we got here, my father spent a year working on a farm near Guelph, while my sister and I attended school.

Steve came to Canada in 1951 as a displaced person, having escaped from Hungary to Austria a couple of years earlier. His survival, first from the Nazis and later the Communists was also a long story of heart-stopping adventure, lucky breaks and good decisions. He was also helped at one time by the late benefactor Raoul Wallenberg.

As luck would have it, Steve decided one summer day in 1951 to join some young people on the tennis court at Dundas and Shaw Streets in Toronto, where I also tried to play. He walked me home after the game, and a few months later we were married. By the way, 55 years later, we are still playing tennis together!

Although we have started with nothing, we found life exciting. We worked hard and studied in the evenings. Eventually, Steve and my father went into business together, a butcher shop and meat processing plant. The whole family was involved in it, and after a few years we managed to get ahead as life got easier.

We got involved in our shul, where both of us, as well as our daughters, have been active for many years.

We have been actively teaching the idea of tzedaka to our daughters and to our three lovely grandchildren not just by words, but by example, such as the endowment to the UJA Federation and other good causes.

This has been a good country, a good city and a fine Jewish community, and we are grateful to be allowed to be a part of it all.