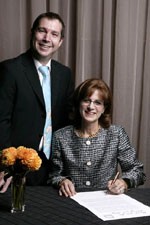 Rob grew up here in Toronto and is the son of Holocaust survivors. Despite the tremendous suffering they endured during the war and hardship upon their arrival in Canada, Rob’s parents’ commitment to Judaism never wavered. They didn't hesitate to send Rob to Hebrew Day School, even though doing so required sacrifice on their part. They continue to serve the community as active and respected members of their synagogue and have raised sons who are very successful in their professions. Their efforts have inspired us both. As we send our own children to a Hebrew Day School, it is gratifying to know that our support of the UJA enables the UJA to help ensure a rich Jewish education for other children as well.

I grew up in the U.S. and am proud and fortunate to be the daughter of two wonderful role models. My father z”l was a community leader, serving as president of their local temple and Jewish Welfare Federation. On a larger scale, my father lived a life of social activism by initiating nationally renowned social programs for the underprivileged. My mother volunteered in the Jewish community and continues to be extremely charitable. In addition, my parents felt strongly about contributing to Israel. In 1995, Rob and I were thrilled to participate in the dedication ceremony for the Coplan Family Community Centre in Carcom, a town in northern Israel.

It is because of our upbringings that Rob and I feel an obligation to be involved, committed and philanthropic both on a local level and within the global Jewish community. I started the Tzedakah All Stars, a kids’ charity program, as well as the L’Chaim Cancer Support Group for Jewish Women. Both of these programs have received support and guidance from UJA. In addition to his busy dental practice, Rob has served as a senior officer at a local synagogue, studies Talmud nightly, and gives very generously to Jewish causes both here and in Israel. We both also enjoyed participating in a UJA medical mission to Israel.

As we raise our family within the Orthodox tradition, we feel it is very important to pass along our precious Jewish heritage, particularly the mitzvah of tzedakah. UJA provides us with the administrative framework through which we can reach out to our fellow Jews in a cycle of caring, learning, giving and receiving. We are very happy to have established a Jewish Foundation family endowment fund which enables us to contribute to the UJA’s worthy charitable activities; and also to serve as role models of tzedakah for our children, as our parents were for us.