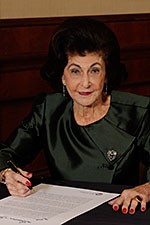 Israel (Isy) was born in Manchester, England, and I was born in Brooklyn, New York. He was the eldest son in a family of three boys and five girls. When he was eighteen years old, his father’s import company went bankrupt. As the eldest son, Isy had to quit college and go to work for a supplier in Japan. In this way, he was able to support his family in England. Once the family’s finances were healthy again, he wanted to restore the family name by paying his father’s former creditors. Although there was no legal obligation to do so, Isy paid all the old debts to the creditor’s great surprise.

Isy was one of the last Westerners to leave Japan before the outbreak of World War II. On his way back home through New York, he was questioned by the FBI, who wanted to know about the Japanese and the state of affairs in that country. He said the Japanese he knew were wonderful to him and enabled him to depart safely.

After the outbreak of war, Isy lived in many countries, including Mexico, in order to continue to support his family and build a new family business. He had a knack for foreign languages and was proficient in quite a few, including Japanese.

Isy and I met when he was travelling through New York on business. The owners of the firm he was working for, at the time, were among my parents’ best friends. After many more visits, we became engaged and subsequently married. One of the countries we visited on our honeymoon was Israel in 1946, when it was still under the English. We then spent over a year living in Belgium before eventually settling in Manhattan. During our marriage we tried to get to Israel often. Throughout his life, Isy happily helped many people in all areas. He even supported an uncle in Israel, whom he had never met. My beloved husband passed away twenty-one years ago.

When I was growing up, my mother was so busy with her charity work that she was never there when I came home from school for lunch. My mother told me that no one in the Syrian Jewish community in Brooklyn should have to be on welfare because it was the responsibility of those more fortunate to help them.

I have always been active in a wide range of charities both in Canada and the United States. In 2006, I received an award from the government of Ontario for fifty years of charitable work.

Today I am in the fortunate position to contribute to UJA which needs every Jew’s support. I pray my children will follow me in acting on the wonderful example set by my husband and parents.