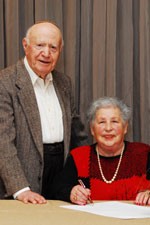 Our society was established around 1910 by a group of landsmen who had come to Canada from Vilno, Lithuania and vicinity. It wasn't easy to start a new life in Canada. We came as furriers, tailors and other trades — and with not much more than the clothes on our backs.

We help our own. That's our way. It was then and it still is today. As such, our early mission was to support our brethren who came from the Vilno region. In those days we focused on anything that would make life a little easier for them as they started anew, such as providing interest-free loans, assistance finding work and a place to live. Sometimes it was simply offering a helping hand if someone got sick.

War-torn Europe after the Second World War prompted another substantial burst of immigration to Toronto. As more families settled here our membership grew. We banded together because we had all experienced what it's like to be a newcomer and wanted to give back.

Then in 1948, a third, albeit smaller, wave of immigration came to Toronto from Vilno. As the years passed, fewer families immigrated from Vilno —but of course, they came from other places. Our society expanded its mandate to support our brethren more broadly — locally in the GTA, in Canada and abroad. After all, aren't we all part of the same people?

A key milestone for the society was the purchase of the Bathurst Lawn Memorial Cemetery. This ensured that every member in good standing upon his or her death will be entitled to a cemetery plot here in Toronto.

Israel was also a very strong focus for us. Over the years, we supported many projects including: Tel Hashomer Hospital, Therapeutic Riding Program — Kibbutz Grofit, the development of the city of Eilat, Beit Dagan, Kfar Gvirol, the purchase of ambulances in Israel and much more.

While our membership has been somewhat modest in size (about 100 members or so) we were always mighty in heart. Our spirited volunteers worked tirelessly throughout the years. Notably, the Masada chapter, our women's auxiliary, has been a very dynamic force within our group contributing vastly to many causes locally and abroad.

Each year, the society donates funds to the UJA Annual Campaign. It is important that we continue our support even long after we have each passed on so we established an endowment fund that will give to the campaign in perpetuity. This honours one of our most important Jewish values: Take care of our own and others who are in need. We especially want to support the community that was there for us in our early days in Toronto.