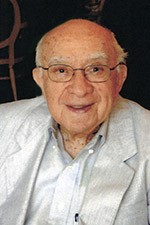 My parents Mary and Morris Farber came to Canada and the U.S. from Russia. Through hard work in a confectionery store on Queen Street, they were able to send my brother Lionel(Lester) and me to the University of Toronto. I graduated from the Medical School in 1942. I received a PhD in Biochemistry from the University of California, Berkeley in 1949. My parents sent my sister Sophie Goldblatt to the Julliard School of Music in New York and she became a professional pianist. My brother received his PhD in Biochemistry at the University of Toronto but had to emigrate to the U.S. to obtain a faculty appointment.

After I earned my PhD, my wife Ruth and I wanted to return to Canada. Unfortunately, this was impossible at the time. No university in Canada would accept a fulltime Jewish faculty member in their medical school.

We remained in the U.S. for more than 25 years with positions at Tulane University, the University of Pittsburgh and Fels Cancer Research Institute of Temple University.

I was appointed the Chairman of the Department of Pathology and Professor of Biochemistry at the University of Toronto in 1976. I was then able to return to Toronto with my wife and my daughter, Naomi Beth. I remained there until my academic retirement in 1993, the year my wife passed away. I married my current wife and close companion Henrietta Keller Schleider in Columbia, South Carolina in 2000.

My daughter is Professor of Social Work at the University of South Carolina and Henrietta's daughter is married to Rabbi Sanford Marcus at the Tree of Life Temple there.

I am most proud of my contributions to Toronto and my profession as an active contributor to cancer research and as a member of The Surgeon General's Committee on Smoking and Health of the U.S. Government (1961 — 1964). Our deliberations and conclusions on the Committee have had a major positive effect on the ban of cigarette smoking as the single strongest environmental pollutant worldwide, including Canada.